Do I Have To Submit The Worker’s Comp Report to SSA?

We recently represented “Donald” who was injured on the job when attempting to lift a heavy object.  Donald’s injury required surgery.  Luckily for Donald, his injury was covered by worker’s compensation so it paid for the surgery.  After Donald did not recover as expected, he filed for Social Security Disability.

At some point during the process, however, Donald’s worker’s compensation insurer required he take a Functional Capacity Exam to determine whether or not he could return to his previous work.  The FCE found that Donald was capable of working at the same physical level as before his injury.  Clearly, this FCE did not support Donald’s claim for disability benefits – where we must prove that Donald’s limitations prevent him from performing any work.  Simply put, this type of evidence hurts Donald’s claim. 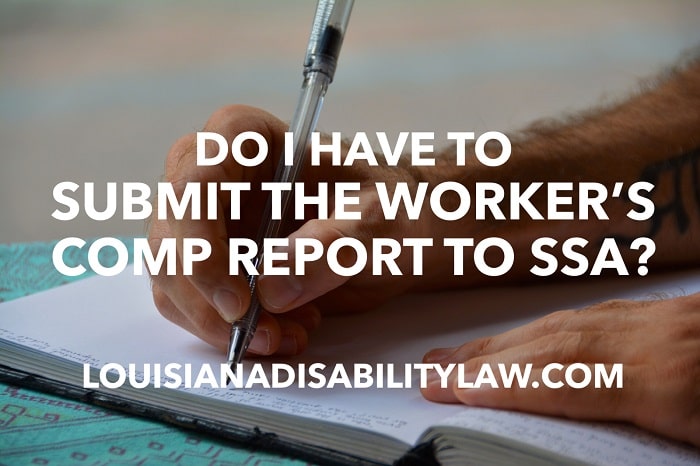 The question is this – Do we have to submit this unfavorable worker’s compensation report to SSA even though it does not help Donald’s claim?

The answer is YES!

SSA has an “all evidence” policy that you and your representative must follow.  This means that all evidence obtained in your case, even if it is unfavorable, must be submitted to SSA on your claim.

But, there is hope.

If you have unfavorable evidence from a worker’s comp doctor or any other doctor, you should promptly advise your attorney so that an effective strategy can be developed to minimize the negative evidence.

In some cases, one strategy we employ is to have your own doctor prepare a letter detailing why the negative evidence is wrong and/or problems with the methods, technique or conclusions of the negative evidence.  Other strategies may be appropriate or required depending on your specific case.

If you have a worker’s compensation claim or other negative evidence that you must submit to SSA, you should seek representation from a skilled and knowledgeable SSA attorney to help in your disability claim.  Our team would love to help – give us a call or use our contact form.

"He gave me a lot of information that we didn't even know, like what's important to tell the doctors." Amanda Thomas, Destrehan, LA
"He made me feel he cared more about the situation than just a paycheck. He cared about me, and I felt that and that's what made me very comfortable with him." Gabriel Guerrero, Paradis, LA
"And I was really worried because I had been fighting for years. Every question I've asked he has explained it. If I didn't understand it, he would break it down where it really made sense." Sharon Bazajou, Kenner, LA
"Mr. Bourgeois and Christy have been a godsend to my family." SSDI Client
"If you need anything, you call them. They give you the answers you need." Todd Danos, Thibodaux, LA
Library Blog FAQs Videos Free Offers Newsletters