The Social Security Administration (SSA) issued new and significant changes to the disability program that makes it easier to disregard your own doctor’s opinion.

These new regulations state that SSA will no longer give a specific weight (i.e., controlling weight) to any medical opinions, including from the claimant’s own healthcare providers.

This is a significant change to prior regulations.

Effective March 27, 2017, and applying to cases filed on or after that date, this change is sure to make denials more common and approvals more difficult. 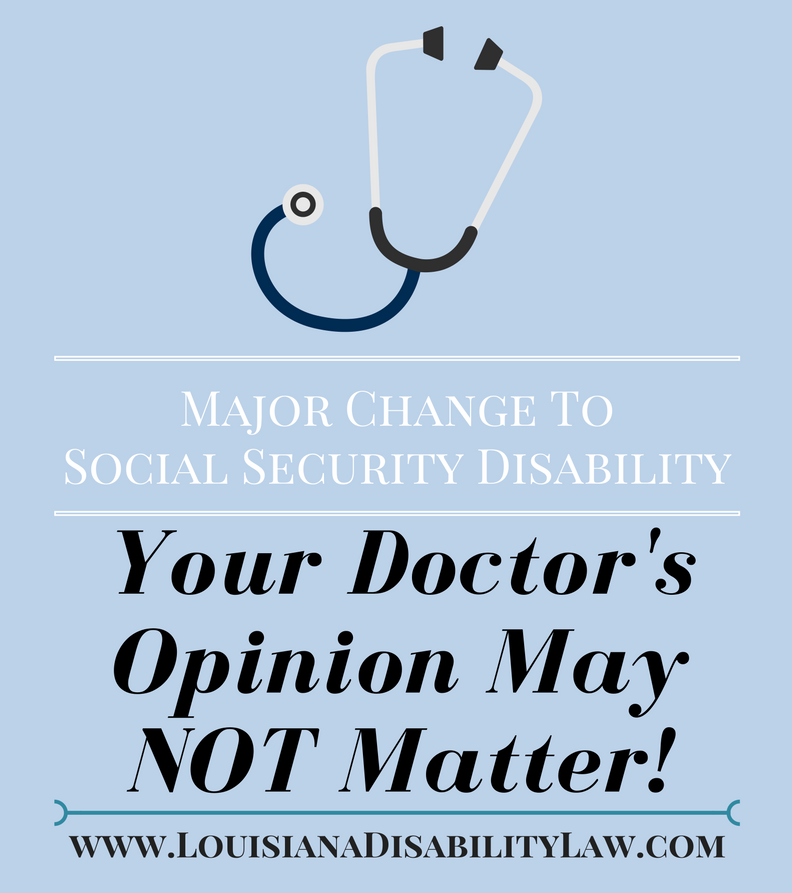 SSA removed the term “treating source” from the regulations entirely and replaced it with “your medical source.”

SSA cited the burdensome number of findings required by adjudicators under the current rules, conflicting federal court perspectives, and the changing nature of the primary healthcare system as justification for the proposed changes.

SSA stated that changes in how people receive primary care have undermined the presumption that a claimant’s sole treating physician has the longitudinal knowledge and unique perspective objective medical evidence alone cannot provide.

The final rules continue to allow an adjudicator to consider an individual’s own medical source’s medical opinion to be the most persuasive medical opinion if it is both supported by relevant objective medical evidence and the source’s explanation, and is consistent with other evidence.

But the value of opinions from treating sources is no longer acknowledged in the regulations themselves.

And, “your medical source” is not entitled to any special weight in the analysis as it was previously.

Under the old rules, SSA was required to weigh medical evidence from various sources, with special weight given to treating sources.

These new regulations allow SSA to “consider” the “persuasiveness” of opinions from all medical sources and not have to weigh the evidence.

SSA hopes to avoid confusion by having adjudicators focus on how persuasive they find opinions.

Adjudicators will have to set forth a “minimum level of articulation” in defining or describing “persuasive.”

Opinions of all medical sources will be considered

The regulations seem to require adjudicators to consider the persuasiveness of their opinions under the new regulations.

While actual medical diagnosis must still come from acceptable medical sources, opinions as to functional limitations, however, will be “considered.”

In determining persuasiveness, SSA will use several factors, with the most important being supportability and consistency.

The factors, in order of importance, are:

SSA stated, “that evidence from a medical source who has a longstanding relationship with a claimant may contain some inconsistencies over time due to fluctuations in the severity of an individual's impairments.”

SSA plans to include the extent to which such inconsistencies should be taken into consideration in its training to adjudicators.

How this plays out in specific cases will be interesting…

How will factors be “articulated”?

SSA kept a provision that adjudicators are not required to articulate individually how they considered each medical opinion when a medical source provides multiple opinions.  20 C.F.R. §§ 404.920c(b)(1) & 416.1520c(b)(2).  Nor are adjudicators required to explain how they considered the other factors besides consistency and supportability when they articulate their consideration of medical opinions.    20 C.F.R. §§ 1520c(b)(2) & 416.920c(b)(2).  Those other factors, including the relationship with the claimant, must be articulated only if there are two or more conflicting but equally persuasive medical findings on the same issue that are equally well-supported and consistent.  20 C.F.R. §§ 404.1520c(b)(3) & 416.920c(b)(3).  According to SSA, “it is not administratively feasible for us to articulate how we considered all of the factors for all of the medical opinions and prior administrative findings in all claims.” 82 Fed. Reg. 5856.

Adjudicators will also be relieved of articulating how evidence from nonmedical – like from friends, employers, or co-workers - sources is considered. Adjudicators will have discretion as to whether they even have to discuss such opinions.  20 C.F.R. §§ 404.1520c(d) & 416.920c(d).

Decisions of Other Governmental Agencies

Other evidence inherently neither valuable nor persuasive includes statement reserved to the Commissioner – such as statements that (i) a claimant is disabled or unable to work, (ii) has a severe impairment, (iii) satisfies the durational requirement, or (iv) meets or equals a listing; (v) defines residual functional capacity (RFC) in SSA programmatic terms, (vi) RFC prevents the claimant from returning to past relevant work, or (vii) claimant meets the requirements of the Medical-Vocational Guidelines. 20 C.F.R. §§ 404.1520b(c)(3) & 416.920b(c)(3).

An MDI can only be established by objective medical evidence from an acceptable medical source (AMS).  20 C.F.R. §§ 404.1521 & 416.921.  SSA has “clarified” that a medically determinable impairment (MDI) cannot be established by symptoms, diagnoses, or medical opinions.  According to SSA, a diagnosis is not always reliable “because sometimes medical sources diagnose individuals without using objective medical evidence.” 81 Fed. Reg. 62567.

SSA amended several rules to conform to the Balanced Budget Amendment (BBA), which requires that medical consultants who review claims must be licensed physicians or psychologists.

These regulations become effective on March 27, 2017.

This is a major and significant change to the Social Security Disability regulations. The full effect of these changes can only be speculated on at this time.

If you or someone you love is fighting for Social Security disability benefits, give us a call at Louisiana Disability Law.  We have the experience to guide you through this difficult process and help you understand these new changes.