The Achieving a Better Life Experience (ABLE) Act was passed by the Senate Tuesday. It allows for as many as 54 million Americans with disabilities or their families to set 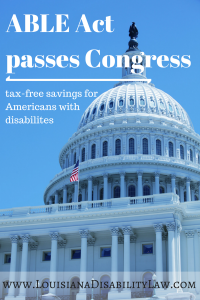 up a tax-free savings account in order to prepare for long-term care beginning next year.

Earlier this month, the House overwhelmingly approved the measure, having garnered 85 percent of Congress as co-sponsors.

The bill next goes to President Barack Obama for his signature.

Modeled after tax-free college savings accounts, the ABLE act amends Section 529 the Internal Revenue Service Code to allow states to establish the program to allow the use of tax-free savings accounts for individuals with disabilities.

The act covers individuals who have been diagnosed with a disability before the age of 26 and are receiving or are deemed eligible for disability benefits under the Social Security Act.

Families would be able to set up tax-sheltered accounts at financial institutions, depositing up to $14,000 annually to save for long-term needs such as education, housing, transportation, employment training and support, assistive technology and personal support services, and any other expenses approved under regulations.

The contributions would be in after-tax dollars, but earnings would grow tax-free.

The ABLE accounts would be able to accrue up to $100,000 in savings without the person losing eligibility for government aid such as Social Security; currently, the asset limit is $2,000. If the ABLE account exceeds $100,000, SSI benefits would be suspended but not terminated. In other words, the beneficiary of the account would not receive a check but would retain eligibility for the SSI program. Medicaid coverage would continue no matter how much money is deposited in the accounts.

This act raises a lot of hope for parents of children with disabilities who wish to save for their children’s future needs without losing currently needed benefits. However, with more than 30 percent of affected families living in poverty, many families will have difficulty saving money after paying medical and other expenses.