Most Claimants Do Not Return To Work After Disability Denial

A recent report by Social Security’s Office of Inspector General found that a majority of claimants that were denied disability benefits did not return to work after the denial.  The study found that almost 60% of denied claimants reported no earnings even after they were denied disability benefits.  Including those who reported minimal income ($10,000 per year or less), the number jumps to over 85%. The full distribution can be seen below. 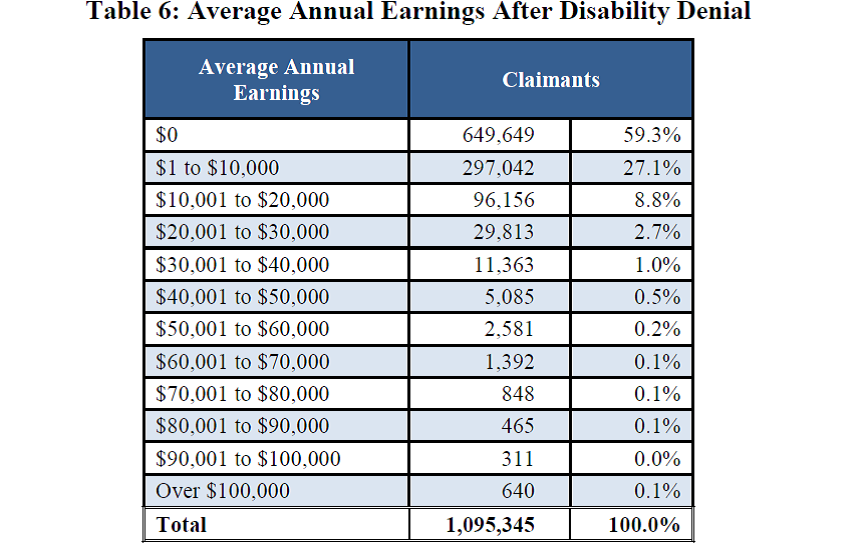 The report was commissioned because some in Congress wanted to prove that Social Security’s disability system was being abused by those who could actually work.  The thought was that by studying the earnings of those denied benefits, substantial abuse of the system could be shown because those seeking to abuse the system would return to work after their denials.

However, as the table shows, when SSA denies disability claims, a significant number of those denied simply do not return to work at all.  And, when they do return to work, seldom do they earn enough money to support themselves or their family because generally, they are working part-time or inconsistently due to their disability.

The simple truth is this -  all these denials do is force a large number of sick and disabled people to be more poor and miserable than they would if their legitimate disability claims were approved.

If you are interested in the complete report, send us an email at [email protected] and we will send you a link to the report.

If you have previously been denied Social Security Disability benefits and have not been able to return to work or only been able to work part-time, please give us a call to set up a free consultation to discuss how we may be able to help you – (985) 240-9773.

by Loyd J. Bourgeois [email protected]
Connect with me
Nationally recognized lawyer and author dedicated to fighting life's legal battles with compassion and care
Be the first to comment!
Post a Comment