Richard Zelasko thought he won the jackpot when he scored nearly $40,000,000 million with a winning lottery ticket in 2013. Then, the federal court reminded him of his unfinalized divorce.

According to a report by CNN, Zelasko won the $80 million Mega Millions jackpot in July 2013, approximately two years after filing for divorce. Since his divorce wasn’t finalized until 2018, Zelasko was ordered to split his winnings evenly with his ex-wife, Mary Elizabeth Zelasko. The court ruled that "the ticket was part of the couple's marital assets and awarded $15 million to the wife and divided the rest of their assets".

The arbitrator of the court clarified that in the state of Michigan,  "marital property includes all property acquired from the date of marriage until the date of entry of the divorce decree," including property acquired during a separation.” He noted that the winning ticket Richard purchased was probably one of many he purchased during the marriage, so the decision to gamble was a financial investment.

By this logic, a loss acquitted by this investment is a loss shared by both spouses. He decreed that if "losses throughout the marriage were incurred jointly, so should winnings be shared jointly."

According to Ratner  “... the message to each spouse delivered by a community property system is that regardless of what is done by each spouse and how it is done, each spouse will own equally all of the assets generated or deliberately placed into the marital community by either spouse. In addition, each spouse will be equally responsible for all the debts incurred by either spouse on behalf of the marital community. A goal of a community property system is to facilitate long-lasting marriages by freeing each spouse to contribute (or not) in a variety of ways, especially nonpecuniary ways, without worrying about the need to contribute in pecuniary ways or in ways that can be proven to facilitate greater financial earnings for the community as a whole."

Louisiana prefers equal division because it recognizes all contributions to a marriage should be accounted for, not just financial ones. An equity-based system creates a bias for higher-earning, financially investing spouses. It does not account for undocumented contributions and labor.

How You Can Protect Your Lottery Winnings In Louisiana

Most people believe that chance circumstances are separate from the individual. After all, if you find a dollar on the sidewalk, would you have to contribute that bill to the family pot? Unlikely. While courts are unable to track every chance encounter with money, they have the capabilities and authority to monitor large winnings. From lottery winnings to auctioned junkyard finds the state documents all large earnings as marital property. 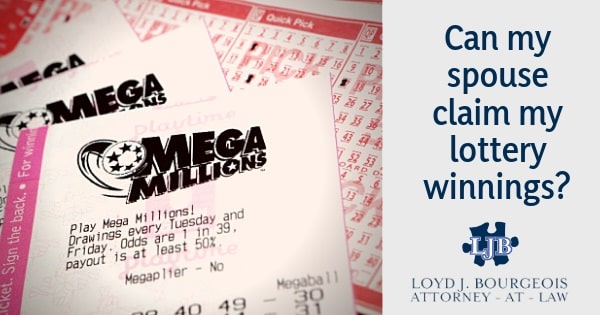 Honesty and communication is the best strategy to ensure a fair divorce. By accurately documenting all assets, applicants prevent future lawsuits and court orders during the process. When couples work together, they are able to divide their assets while also keeping separate investments.

The best way to take charge of your finances is by getting an experienced attorney to look at your case. An attorney can help you generate an accurate record of your earnings and investments, so you will know what funds the courts will target first. An attorney can also keep you updated with the divorce filing process so you can have a guarantee of your separation--before you make any big investments.

Don’t be like Zelasko. Don’t get duped by chance circumstances. Protect the money you worked hard for by calling LJBLegal at 985-240-9773 or use our quick contact form. Let our firm put you on the easy road to financial success!