Sometimes marriage doesn’t work out. Rather than trying to fix it or suffer through it, couples get divorced. It is widely known that about 40 percent of marriages, in America, end in divorce. Of that percentage, Louisiana has the fourth-highest divorce rate across the nation, according to 2017 data from the U.S. Census Bureau's American Community Survey. Legislators know that divorce is not only expensive to the applicants but also to the state itself. A  “2008 study published by the Institute for American Values estimated that, at that time, Louisiana incurred about six hundred seventy million dollars each year in state and local government spending on family fragmentation costs...”. To save taxpayer dollars, Louisiana government has been trying to counter these results for years, and finally, they have found the ULTIMATE SOLUTION: A Task Force. Not just any task force. A Divorce Task Force. Try saying that five times fast.

In May 2019, the Senate Judiciary A Committee, Sen. Beth Mizell, R-Franklinton, proposed a new bill, SCR 107, to “create a task force that would identify incentives, such as tax credits, for premarital and pre-divorce counseling to encourage couples to stay together.” Their justification for this absolutely flawless plan is the same tiring reasoning of a plagiarized Ms. America speech: “think of the children...also end world poverty.”

According to Bill SCR 107, 44 percent of children live in a single-parent household with the household income dropping 40 percent after divorce. A prestigious college study revealed, “that children who are raised by their married, biological parents enjoy better physical, cognitive and emotional outcomes, on average, than children raised in other circumstances”. Bill SCR 107 justified the creation of this task force by noting that “couples who participate in premarital counseling experience a thirty percent higher marital success rate than those who do not… [,and] that couples already in the divorce process indicated that twenty-five percent of the time married parents of minor children believed that the marriage could be saved and more than thirty-three percent indicated that they had an interest in reconciling the marriage”. Louisiana Senate predicts that “if premarital and pre-divorce counseling causes divorce rates to drop a mere 33 percent, then Louisiana would save “...two hundred twenty-three million dollars each year [and] ...an estimated five thousand Louisiana children” will be protected from the disastrous psychological effects divorce might bring”. Officials hope that additional education about legal proceedings of divorce might convince some less urgent divorces to work out their marriage. It can also prevent unknowledgeable couples from entering marriage too quickly.

We have one question… How dense do legislators think Louisiana citizens are? 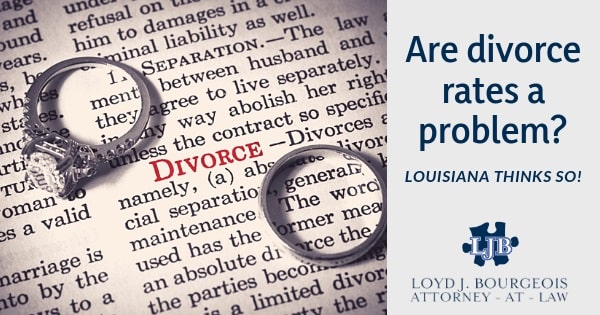 No amount of marriage counseling tax breaks will stop couples from a much-needed divorce. Instead of looking at the negative possible outcomes of divorce, legislators need to consider the benefits of it. Our great country and state have given us a right to the pursuit of happiness. That happiness is found in a loving, fulfilling relationship. Divorce gives people a second chance at love. It helps them escape the legal clutches of past relationships with abusers. It gives children the chance for a better, more stable family with loving parents. Divorce is not the static evil legislators claim it to be.

The idea of a task force saving a marriage is absurd. While some marriages may be fixed with post-marriage counseling, some divorces are inevitable for the better. Marriage is not only love, but a partnership. Knowing the signs of an unhealthy, unfair commitment prior to filing for divorce can prevent you from experiencing the mental and financial difficulties some face after announcing the split. The common marriage horror stories this bill points out can be avoided with the right research and preparation beforehand. We examine these stories, in detail, in our FREE book, 16 Sensible Actions to Help You Plan and Prepare for Your Divorce. Inside, you will discover the harsh realities they sugarcoat in typical marriage counseling. You will know how to protect your finances in case of a nasty split down the road. You will also find out the many different ways you are legally connected to your spouse and how to create a separate identity for you and your children.

Forget government task forces. PROTECT YOURSELF, and stay ahead of the game. Click here to download our FREE divorce resource, 16 Sensible Actions to Help You Plan and Prepare for Your Divorce and call 985-240-9773 so we can get started getting you your life back.